This is the spot where the missing beam has been removed, ready to have the new beam placed… 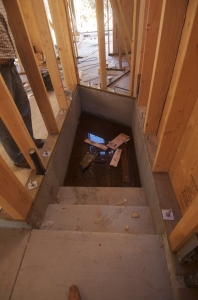 The mini swimming pool in the wine cellar

The beam that was in the wrong place last week has been removed, and a new one will be put in soon.  Lots of progress has been made on the roofline, and the strawbale library roof has been framed… but our strawbale expert has disappeared off the face of the earth.  Time to find someone new, and figure out what we need to order to get this library built!  We hope he hasn’t fallen into a sinkhole, but three weeks of unanswered phone calls is too many.

We got the first small rain of the season (early!!) and ended up with a puddle of water in our wine cellar.  Hopefully we’ll  be all dried in before the rain starts in earnest.  A little mildew here and there on the wood… sigh.. it will all be dead by the time we move in, but still… I would have liked to see us get a roof on before it rained even a tiny bit.

This weekend we embarked on another “little project” – remodeling the kitchen and bathroom of the cottage in the back.   Since there isn’t really a guest room in the house apart from our rather small office, our plan is to have the cottage really nice for one night to two months stays – but a cramped kitchen and a bathroom without a bathtub make that not so pleasant for our guests, so we are ripping out the bathroom and the kitchen in the cottage and re-doing them.   That we are doing this should be *particularly* amusing to the people who know the story about the two year moratorium on remodeling…

The cottage being deconstructed

The cottage before deconstruction

Want to join the discussion?
Feel free to contribute!